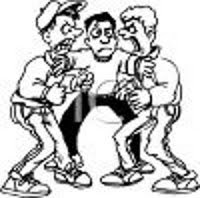 Where does it have to being

Depending on your environment here is a very good start, a good list of behaviours but the out comes and behaviours are the same.

As that article points out you can do a strength & weakness approach and attempt to categorise things, though most like being that it's people we're ultimately talking about, it's going to be too fluid to be that black and white.

Typically I find that the true test of things (people, process, approach, engineering, relationships) which are basically complex systems is what happens when they "go wrong".

Most healthy systems will attempt to self heal and come back to kilter after being effected, a family can bond together after a loss of a member for self support, a try {} catch {} exception can be handled by an aware system, two partners can communicate after a period of conflict, etc. ....... if the system is able and allowed

Process process everywhere but not a drop to drink

It seems a fair few assumptions are made about process, basically that as long as "its there" or talked about, life can carry on as usual (resisting any change). Or in other words, as long as you pay lip service to "process" you can carry on creating as much chaos as feels good.

A process is just a tool, and a social/team one at that. It is not a cure for the ills of a sick organisation, it's something that is put in place to support a way of working once that way is decided and agreed on, otherwise you'll just have the system trying to do things and defaulting to the old chaos when the new breaks down a missed equilibrium.

It's good to talk

To talk about the value of good communication would be insulting to the average reader to cover, though lets just say without that, nothing else is really relevant. It's akin to being concerned about your health or fitness, while still smoking.


If work is the changing of idea(s) into a tangible output ..... then the communication (quality of) has to be the #1 issue in the early stages.

I dare say we've all been there, getting the same piece of information from several people via email that turns into massive email storms from people "just being helpful". They are just creating work for everybody having to filter and tolerate this wonderful and particular kind of weirdness.

I remember working for a company that had a few locations (different languages & geographic locations), they had the equivalent email alias of everyone@ ..... the rational behind this being that company wide information would be sent there, announcements, info from the boss etc....... two days is all it took to have people using it for discussions about who was buying biscuits and tea.

I blocked it and encouraged others to as well.

Because when people are overloaded they shut down and things are missed.

With things like this going on, any "magic process" will fail.


Make sure you have that taken care off before trying to get anything going, as it will just fail in a heart beat and cause more confusion, resentment and resistance that was there before you started.

As ultimately you'll just be another voice in the cacophony, though hopefully one that will recognise that things like shouting, bullying, threatening, micro managing, and being generally chaotic is a source of the issue not the solution.

So when faced with it, just do that, face it don't add to it.
change psychology software engineering teams