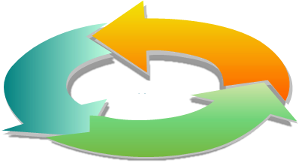 For those of you that haven't worked in kitchens full time for a few years or more or read Kitchen Confidential the similarities are striking.

In part one I went over the roles and how effective teams exhibit the same traits in different situations. Obviously it's more about jelled trusting (and trusted) teams opposed to much else.

The timing and duration might be different between the actual events of building software and a service over an evening in a restaurant, though they are mostly similar for successful teams.

As I mentioned before, I've had the pleasure of working in both successful kitchen (teams) and on software projects, in just about all roles so far (made it to 2nd chef and lead dev a few times).

In both of the situations I don't think (or hope in hindsight that) I ever fell prey to the conceitedness that I was "leading" either teams or situations, I was just aware of what was going on and occasionally asked people to clarify to me or them that they were OK.

As it was, we all just knew who did what, where, when, how, what was expected and how that all fitted together. Nobody was scared of failure for something they weren't responsible for, let trusted that the people who were filling the relevant roles would do so, it's why there were there.

We sorted that out before we tried to do anything, seems easy in hindsight.

Competition and the death of learning

Luckily for the most part people understood that no one person is an authority on everything, so we were all learning as we went along. The idea of competition never turned up as it would of done nothing but killed the trust and openness that allowed us to learn from each other. If I'd know I was going to "look weak" or be belittled for asking how to make a white sauce or how a particular regex worked, I wouldn't of asked and would of never learned.

Best leave that kind of attitude for sports.

Too busy to "manage"

Typically I found myself too busy doing what I was suppose to be doing in either situation to both myself by bothering other people about what they were doing, opposed to ensuring that I was OK and just trusting them. It's a hard thing to do when you "feel responsible" for what could be seen as a "failure" overall, though it isn't really and chilling out will allow the people to relax and things work out the way they should, it's what skilled happy people want to do, get it right and get it done.

After a busy menu writing and service prep (or even a requirements kick off and design) I always noticed in successful environments that the restaurant GM or business "suits" left the chefs to do their job.. The idea of standing in the kitchen, changing the menu and trying to pour more wine that is needed into a reduction or pasting white sauce on steak was (correctly) alien to them.

They were do busy having a smoke break knowing they had completed their task in order and now it was over to the kitchen (production engine of the company) to turn around ideas and desire into service and deliverables.

Conversely once service was done and all the food was out (software launched) most of the kitchen would be out the back having a smoke (yes I used to years ago) relaxing after a job well done, while the front of house (support staff) helped out with the new deliverables and gathered the feed back. Occasionally a chef would have to pop back into the kitchen and remake a meal, or cook a steak some more.

But that the communication & planning was taken care of up front and then allowed to be executed it was rare.

Then the front of house bring all the plates back in and the kitchen porters take over while the chefs play quake ............

I always trusted the members in those teams because we knew what each of us had to do, and we allowed (left alone) each other to do it. There was no need for threats & shouting or overtime in the kitchens/teams I was in because they were too well oiled and efficient.

"We don't work over time to get the work done on time, as to shield ourselves from blame when the work inevitably doesn't get done on time"

Or as Shane Hastie said :

"Make yourself redundant – the leader must be able to back away from the team and know they have a concrete understanding of the goals and objectives they’re aiming to achieve and have the support they need to get the job done."

(I cut out the second half of the quote as I don't agree with that bit).

Do it right, enjoy it and chill out, also remember : if you're not happy doing it, do something else or do it somewhere else.