January 30, 2011
I've always been interested not only in the specifics of software itself, but also  in the method of how software is created, and what surrounds it. That being teams, leadership, management, external factors, business constraints and likely most importantly the sociology and psychology of creation.

More of a holistic systems view of the whole process I believe.  My degree and area of interest is Software Engineering Management so some of the how as well as the what.

I realised I've found myself explaining the same topic repeatedly to people in a business context (i.e. suits) who don't develop software, but who interact with people who do.

So I thought it best to just write it up, then I can direct future people I encounter who ask or need to understand it to here. Also share my thoughts and hope to elicit ideas and experience from others, as this topic really interests me.

The topic is that of the psychology of a developer, when operating a maximum capacity (relative to them). What's it like, how do people get there and what are the good and bad aspects of it.

Typically I find organisations (mid level managers usually) expect and demand maximum output of developers at all times, in any conditions and with no support. Any failure to achieve this with a (typically) negative or unsupported environment is wholly the developers fault (see my other post on burnout for what happens then !).

The usual analogy for that situation is a Dickensian work house, where more hours and faster (more frantic speed) should equate to more output.

Obviously nonsense, though still lots of places like that about, and it's all of our responsibilities to eradicate them.

The mind set of a developer when at maximum level of creation and development is covered by an area of : Positive Psychology. in particular "Flow".

Introduced by Mihály Csíkszentmihályi it is a well accepted description and understanding of the mental state of individuals, who are wholly engaged and passionate about an activity they are doing. There have been many posts on passion in developers being one of the main things, and I agree (we just need to educate recruiters now).

The wiki page for Flow covers a lot of the general aspects of the topic, so I'd like to relate/translate that to software creation and teams. The page does mention professionals and references Hack Mode and The Zone.

One way that I attempt to explain the state of being in Flow to people who haven't been, or can't understand it in a developers context is to reference Star Trek Generations. While a techie film itself, it's still more likely to have been seen by someone I'm explain to, than them reading psychology just for fun.

In the movie there is a character, Soran (Dr. Tolian), played by Malcolm McDowell (yes, I know he must be the evil baddie he's English .......)  who is attempting to get back into the Nexus.

The Nexus is described as :

"The Nexus is an extra dimensional realm in which one's thoughts and desires shape reality."

by Memory-Alpha.org (which is one of the better descriptions I've heard).

This is a fairly fanciful analogy I'll admit. Though there are a lot of comparisons of being in an place/zone where everything you can think of just happens, where you laugh at test units and write and re-write swathes of class/functions in moments. Code of pure gold flows from the keyboard etc.

And it's a true pleasure, not only are you creating at a pace that would make accountants shiver when calculating your hourly rate vs effectiveness.

Though far far more importantly, you are doing what you enjoy and are feeling the rewards of creativity near instantly. Maslow would likely describe  you as in a state of : Self-actualization.

For me there is no reward, monetary incentive or management manipulation that can either induce this, or surpass the reward of experience itself (though for sure I'll accept a health pay check/equity for it when it does happen !).

Though it raises two very interesting points for me :


Allowing it to happen

Personally (and in the research I've done) the path must include a level of passion and/or very high engagement. This typically can't be demanded by management or forced onto a person.

It's much like (my aversion to) the TV self-help demagogues, who are forever telling (prescribing to) people how to live, opposed to the people creating and embodying the answers for themselves.

In counselling, it's called client centered. Zen and other eastern philiosphys continually talk about the energy and power within, and that's where the source of a lot of this comes from.

The main thing that management, and more suitable team facilitator(s) can do, is create and protect the environment to allow the developer(s) to reach this state. Once that is in place, communicate the challenge/goal and desired outcome, then stand back and get out of the teams way. Ego is the typical reason this doesn't happen as weak management has to feel "in control". A shame, though a common human failing.

Attaining Flow is a skill and ability, it comes from engagement, curiosity, the challenge and having the skills to overcome the task.

Meaning you have to be good enough for the challenge, that you're not battling with your tools. Be that, a programming language, the server configuration, understanding of a protocol etc.

So the things needed are :

As per the diagram (I grabbed from wikipedia) : 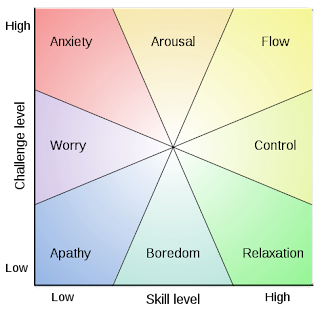 Staying there for the individual is a matter of practice, of concentration and immersion. Much like practicing to meditate, I remember when I started meditating I would last two maybe three minuets and my mind would wander, years later and half an hour is no real challenge within itself (more so the motivation to actually begin now !).

I find the single most important piece in a development environment that is lacking, is the understanding of the other individuals (hence writing this so I don't have to keep repeating myself).

It can take any where from 15-30 mins for an individual get into this state, and become engaged and start producing while there. The constant inquiries of "Have you done it yet" or "Lets all have a meeting to listen to me talk" is doing nothing but breaking that lead in time, and hitting the reset switch for getting back into it. I'm all for communication, of course, teams and organisations need it. Though when necessary and in context.

I think the only thing that is more disruptive (and mentally painful) from being stopped getting to the Nexus ....... err a productive state of mind ..... is being ripped out of it once there. It's so jarring I've contemplated drowning people before ..... though have put it down to their ignorance opposed to malice.

Shouting into phones in (or at people on the other side of) an open office (which themselves are very negative to focusing) isn't helping.

Typical management is driven by interruption, Jason Fried 37signals has talked about interruptions lately, and way pre-dating him is Peopleware

that covers it in much more detail.

Personally I become very frustrated when subjected to the kind of environment that stops productivity and high quality productivity at that.

I (and just about all developers I've ever talked to) can do far more in 4 Flow hours than 8 of typical office, and it's far better for everyone involved. Let alone the future as the software is of a much higher quality : think lower Technical Debt.

So why not let it happen and protect it ?

As ever take care of #1 and have a thought for others trying to get things done.


P.S. The statistical support of this is here
development process psychology software engineering