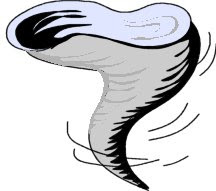 Once again it looks like a good walk home pondering, and some thinking about how mother nature does things and an idea just appears.......

Working up (or back depending on where you are) it's likely that you are in some kind of structure which resembles the following (in a software place that is); someone with money and an idea or desire, and some people they have hired to get that done.

Now if there is enough work (or a wide enough scope), the people in the middle likely end up getting more people to do the actual work.

Which brings me to the analogy, of a tornado. At the top you'll have quite a large influence looking out over the savannah of business with a view granted by elevation (CEO vision, company direction, etc). Now at this top level, there are large ideas and big plans, large slow moving schemes and strategies, slow relative to day to day implementation that is.

Ideas of months, quarters and years.

Now the next area (middle in a tornado or 1 step scaled in for fractal people) would be where the (sane) ideas from the top layer get filter too (i.e. what can we really build for the boss). Here they percolate, are weighed, discussed and start to become real, plans are made, dependencies thought about, architectures considered and resource consulted.

At the correct time and after planning and once packaged up into a bite sized chunk, the idea touches ground and becomes real.

While it's being created (coded) the next chunk is being filtered and refined, the tornado starts to follow a path and the foundations are laid.

Also attempting to get the base spinning at 500mph to get some real damage ...... errr work done, without the momentum and direction being observed it's futile.

Such things start small and slow by necessity, they need to form, then they speed up .... and take out all things in their path.

From the slow overarching path of the top of the tornado to the inner core spinning, the cycle is the same, feeding in and back out at the correct time, correct place and to give the correct momentum.

Even down to the continuous integration of the development, or even the cycle of a http request.

Attempting to be in the wrong place at the wrong time will have two effects, for a small or undeveloped development tornado it will stop it, for a large one you'll get blow out (and thrown down the stairs by the development lead).

Much as with Mandelbrot, it's all looks the same, just depends on where you stand ...... so best know where that is before doing anything.

Remember if you're a development lead of some kind you have to ensure the correct amount is allowed though at the correct time relative to the speed of the core. Build momentum in development much in the same way as getting a fire going, build it up into the bonfire before throwing houses on it.

Protect it from the wind in the middle. It's your job to be the gate keeper for distracting breezes and hot air .......so the core team don't have to content with it, they are too busy spinning at top speed tearing things up.

While the core at step 3 is biting off and delivering they are left alone by the facilitators at stept 2 till they have delivered.

By which time the facilitators have seen the results of the last sprint, and thought about the next one, and left the current one uninterrupted.

All seems simple when you write it down really :)